Magazzini Generali della Brianza Spa was established in 1937 and has always worked in that sector of logistics that is dedicated to international commerce.

In 1969 the Concorezzo In-house Customs Section was opened within the company structure. Covering an area of about 150,000 square metres with more than 40,000 square metres of covered warehousing, it is policed by the National Financial Police.

The company becomes one of the main customs structures in Northern Italy, with daily traffic of more than 400 trucks, travelling mainly to and from North European and Eastern Countries.

During the nineties, thanks to the lifting of customs restrictions brought about by the establishment of the European Union, the company concentrates on logistics services, in particular warehousing and distribution.

In 2004 the company is sold to the Barbazza family, who make further investments to consolidate an integrated business model created specifically for those SMEs that are constantly increasing their imports, particularly from the Far East.

In keeping with this strategy, in 2006 the entire share package of FRILOG SRL, a company specialising in distribution logistics, mainly in the textile sector, is purchased.

In 2007 a share in LOGSERVICE ITALIA SRL, a company specialising in distribution logistics in the Consumer market, is purchased.

Nowadays the company boasts over 100 collaborators and a turnover of more than 7,5mil € 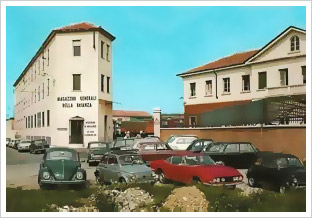